Gratitude is always appreciated. But when it comes from a pure heart, no strings attached and is given abundantly, the joy it creates in the receivers heart can lasts a long, long time . . . hours, days and in some cases, is never forgotten. I’m thinking out loud this morning about something that happened several days ago. And I’m still smiling.

Meet Pebbles. She lives not far from me.

Her owner is a dear nephew——he knows how much my sister ( Ruthy ) and I love him . . . he really does. But, we fuss at him continually about Pebble’s care. Pebbles is fed, watered and on really cold days and nights, she’s taken inside. In nephew’s defense, he works odd hours and has his own struggles. Nevertheless, an animal needs affection and attention, along with food and water. It’s not good to get too busy to give that kind of care also——even Jesus said that man does not live by bread along . . . our animals need more too.

The Lord created man above animals. He put us in charge over them. Owning a pet is a choice. When we make that choice, we should not take ownership lightly. The bible tells us that one day we will answer for every word we speak and every action we take. Those are instructions not to be messed around with.

On to the story. Ruthy called me early the other morning, saying, “Lets go put hay in Pebble’s house. It’ll be warmer.”

“Okay . . .” I agreed. We bundled up and braved the cold, brisk Oklahoma wind. Pebbles greeted us with her usual tail-wagging exuberance. She didn’t mind the cold, it was company she wanted. Close to her doghouse is an old tractor tire with sand in the bottom. She likes to lie in the cool sand when summer temperatures reach the high nineties. But it’s cold in December. Ruthy and I padded the tire with hay, after doing her house and the ground around the doghouse. First she ran into the house and peeped out as if saying, “This will do nicely.”  As soon as we finished filling the tire, Pebbles jumped into the middle of the hay and rolled about, rubbing her head into the fresh hay. 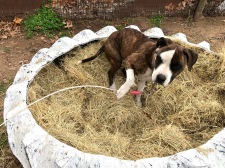 Pebbles was one grateful little girl. We played a bit, and as Ruthy and I were leaving we waved and told Pebbles we’d see her later. As I looked back to see her sitting in the middle of the tire, settled into the hay, watching us, I heard her say, “Thanks, girls!”

We can take a lesson from Miss Pebbles, and show our gratitude for the many kindnesses our family and friends show us. People need affection too——show some to someone you know. Until next time, God be with you. MaryJ 🙂 🙂 🙂

6 thoughts on “Gratitude, at Its Best”

This site uses Akismet to reduce spam. Learn how your comment data is processed. 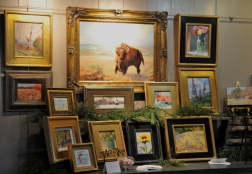 At the Canvas & Clay Art Show. 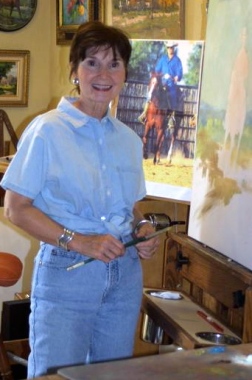 Working on a painting a while back…

Me working on a commission… 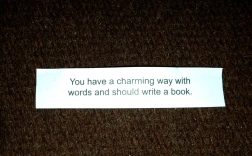 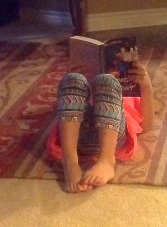 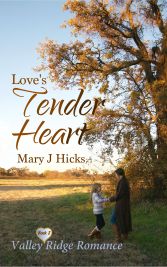